the Text of
the New Testament

The New Testament is the part of the Christian Bible that was written in Greek more than 1,900 years ago. The original manuscripts that were penned by the authors are no longer there. However, these manuscripts were copied and these copies were widely distributed. It is difficult to copy a large text by hand without making any mistakes, and some of these mistakes became part of certain lines of transmission. Since the New Testament is such an important text for the Christian church it is not only relevant from a historical perspective to ascertain the precise wording, but also from a practical perspective. Churches use translations based on a Greek text, which in itself is the product of a careful comparison of the oldest available manuscript copies.

In this lecture, Dr. Dirk Jongkind will discuss questions of how we can recognise copying errors and why we can have confidence that we have good access to the original wording of the text. The speaker will also discuss some of the most important textual variants. 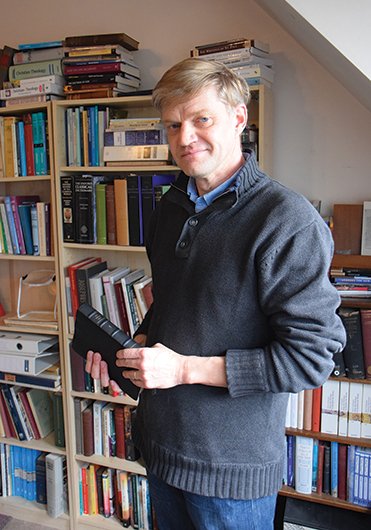 Having been a flower grower till 1997, Dr. Jongkind attended Tyndale Theological Seminary in Badhoevedorp (1997-99) where he received and MA in Old Testament. In 1999 he and his family moved to Cambridge in the United Kingdom to pursue a MPhil (2000) and a PhD (2005) in New Testament at the University of Cambridge. He became a Research Fellow at Tyndale House, Cambridge, and was elected a Fellow of St Edmund’s College, Cambridge, in 2005. Currently he is the Academic Vice Principal of Tyndale House, Cambridge. He also is a Fellow of St Edmund’s College, Cambridge, and Affiliated Lecturer at the Faculty of Divinity, University of Cambridge.