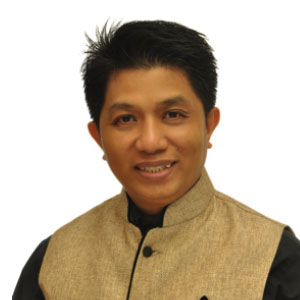 Mr Eudenice V Palaruan served 18 years as a faculty in the Theory and Choral Conducting Department of the University of the Philippines College of Music. He was also invited to teach Liturgical Composition, Vocal Method and Choral Literature in the graduate program of two other institutions; the St. Paul University Manila College of Music and the Asian Institute for Liturgy & Music (AILM).

Mr Eudenice served as a resident composer and arranger of the Philippine Madrigal Singers and the Ateneo de Manila College Glee Club. He was the conductor of the San Miguel Master Chorale, the Greenhills Christian Fellowship and the Union Church of Manila Chancel Choir. For the past seven years he was the resident conductor of the International Bamboo Organ Festival where he directed many of Philippines’ leading choirs in the performance of early European choral music and the revival of Latin American baroque choral music.

As a composer he introduced choral and vocal works that exhibit the indigenous Filipino sound. His compositions and arrangements are published by the Philippine Madrigal Singers, the National Music Competition for Young Artists (NAMCYA) and performed by Asian and European choirs in international festivals and competitions. With his active involvement in the choralization of Philippine and other Asian indigenous music, he is often invited to give lectures in Asia and Europe.

Mr Eudenice is currently the Choral Director of the Singapore Symphony Chorus and an associate professor at the School of Church Music in Singapore Bible College. He is married to a liturgical dance choreographer, Ann Lagumen and they have three children. In the largest dumpsite of Metro Manila known as the Smoky Mountain both Eudenice and Ann were involved in giving dance and music lessons to underprivileged young children under the Philippine Christian Foundation.

Dive straight into the feedback!Login below and you can start commenting using your own user instantly