Our multicultural faculty with adjunct and affiliate professors is composed of more than 50 members. They are multinational and represent most of the denominational and non-denominational churches in Protestant traditions. 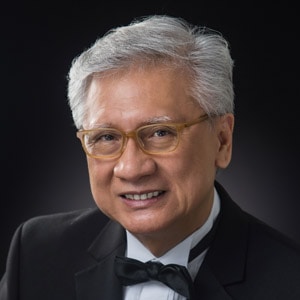 Dr Joel Navarro teaches and administers Choral Conducting majors in the graduate level. He directs the Canticorum, SBC Chorale, and the SBC Singers. Previously, he taught at Calvin College. Earlier, he was assistant professor and one-time Chair of the Choral Conducting Department at the University of the Philippines College of Music. In 2016, the University bestowed him the Reynaldo T. Paguio Award in Conducting on its centennial anniversary.

He was known internationally as the former Music Director and Conductor of the Ateneo de Manila University Glee Club which amassed a string of top prizes in European choral competitions during his 22-year tenure. Dr Navarro has been invited to Asia and the United States to give lectures, workshops, and choir clinics. In 2002 he was one of 31 scholars to lecture at the 6th World Symposium of Choral Music held in Minneapolis.

In the United States, The Capella of Calvin College under his direction won prizes at the Florilege Vocal de Tours International Competition in 2008. In 2014, Calvin College gave him the lone From Every Nation Faculty Award, given to an outstanding faculty member for promoting goals of interculturalism and racial reconciliation.

To scores of his prize-winning conducting students, he is a beloved mentor, faithful discipler, lifelong learner, and a fastidious supporter of programs which enable his students to expand their influence as servant-leaders, collaborative artists, and interdisciplinary scholars. Passionate about composition, integration of faith and learning, and intersections of indigeneity in modernity, Dr. Navarro continues to write and arrange hymns, anthems, art, concert, and worship music for professional, university, community, and church choirs. His choral compositions are published by Musica Manila, GIA Publications, and Adoro Music Publishing.

He is married to Amy Navarro. They have three grown children who live in Manila, Calgary, and Nairobi. They have two young granddaughters.

The mission of Singapore Bible College is to glorify God by training faithful servants of Jesus Christ for the edification of the church and the urgent evangelization of the unreached.